So you want to join the Convocation? This forum is here to give you a brief introduction to our guild and let you write your own applications for the Scions to review. Good luck!
Post Reply
2 posts • Page 1 of 1

How long have you been playing World of Warcraft?

Since the end of Wrath of The Lich King

How much experience do you have with roleplaying?

Being pen and paper roleplaying for the past 10 years, including tabletop and forum RP
(both DMing and Playing)

LARPing for the past 5 years

I also run a LARP with my partner since 2015

How confident would you say you are with the English language?

If you were to join the guild, how often would you be available?

Usually am available between 19:00 to 23:00 server time Monday – Friday, weekend availability varies though mostly free whenever.

If you were to join the guild what would be your priority when online?

I play Warcraft mainly for RP, I don't mind the gameplay but its a secondary concern to me. I'm more inclined toward social RP but am quite happy playing in linear, GM lead events.

Why do you wish to join the guild?

Currently co-running an RP guild that recently has become quite inactive, looking for a way to continue the story of one of my favourite characters. Seeking an active and enthusiastic RP group that enjoys character development and has an IC social side to participate in regularly.

What is your character's name?

What is your character's current occupation?

Currently a Knight Commander of The Blood Knight Order, though being forced into retirement.

What is your character's race?

What is the reason for your character's interest in the Convocation? If he or she is not an elf, what would lead them to an elven organization?

Itharen has been forced into a “voluntary retirement” by the rest of the Blood Knight Order due to his controversial training methods, cantankerous nature and general attitude. The Order has suggested he look for an organization to join while he transitions into his remaining years.

Itharen is an elderly Sin'Dorei, slightly taller than average. A dark and usually scowling face is mottled by scars and signs of alcohol abuse and framed by long, brittle white hair.
His Blood Knight armour is dented but polished and clean along with a pristine tabard, opposed to his personal armour which is smeared in mud, dried blood and rusting in places.

Itharen walks with a limp, he can move quickly if the situation calls for it, but nowhere near as fast as a Sin'Dorei in their prime.

What does your character feel about the Blood Elves' place in the Horde? What is their opinion of the other races?

Itharen has always maintained pride in his people, he respects the other races of the Horde, each having their strengths and foibles though he sees the Horde as an uneasy grouping of convenience. Itharen has a particular hatred of Death Knights and a distrust of Forsaken from the Fall of Silvermoon, a prejudice that has stayed with him.

What does your character think of the current state of the Horde? Branching off from this, tell us in brief about their opinion on Thrall's and Garrosh's Horde.

Having the Banshee Queen as a Warchief is not ideal to Itharen; having fought under her in the Third War he respects her leadership greatly but is distrusting of the Undead, though to him it is an improvement on Garrosh's tenure. Having participated in the Isle of Thunder campaign before realising his people were being used essentially as cannon fodder he became disillusioned and later joined the growing effort to overthrow Garrosh. During Thrall's time as Warchief he saw the Orc as a skilled diplomat and was confident and hopeful in his ability to lead.

Itharen's family, House Bloodshield was a small noble house earning its keep in various trade ventures. During The Lich King's assault on Silvermoon, nearly all of his family were killed. His wife and daughter were slaughtered, his son was turned to a servant of The Scourge. The event left Itharen broken and since he has had trouble forming bonds or conventional relationships with others.


What was your character's life like before they chose to join the Convocation? Give us a summary thereof.

Born sometime after the War of The Shifting Sands, Itharen began his martial career in the Silvermoon Guard. Mentored by an unconventional captain and taught to think for himself and to consider whether orders he were given were sensible, he found himself locking horns with other more loyal guardsmen.
He fought in the Second War after the corruption of Caer Darrow, during which he had a brief relationship with a human woman, abandoning her later for an Elven wife as the relationship between humans and elves grew distant.

During the Third War Itharen became separated from his Son who was fighting alongside him and his family who had stayed in the city with the other civilians. Itharen was knocked unconscious but survived, later learning his family had been slaughtered and his Son had become a servant to The Scourge. Itharen renounced his faith to the Light as many other Elves did at the time and wandered, drinking heavily, abusing Bloodthistle and falling to despair

His mentor reached out to him with word of the formation of the Blood Knight Order, Itharen took the opportunity and joined the new group. At first he justified the abuse of the Naaru M'uru, considering that the Light had failed his people in its darkest hour, if it would not give its power willingly then its people would take it by force.

As time went on Itharen felt the effects of the Naaru's pain as many others did, the horrors of the Scourge, repressed by years of drinking and emotional suppression resurfaced and caused Itharen to doubt his vengeful convictions. While fighting alongside the Horde on Outland against the Legion and the traitor Prince, Itharen came to learn that M'uru had given the gift of the Light willingly. This, along with the restoration of the Sunwell inspired Itharen to have faith in the Light once more.

When the time came to invade Northrend, Itharen split off from the Blood Knights and went on his own personal quest, to find his son. Travelling across the continent with a group of mercenaries he fought through swathes of undead, never seeing his child until later, when the Knights of the Ebon Hold were formed. He tracked down his boy but came to the sorrowful realisation that while he still had the same features, this was no longer his son. He ceased all contact with the Death Knight and returned to Quel'Thalas.

Itharen, relatively disliked amongst the Order amongst both his peers and former pupils he had taught, was assigned a squire who was considered a 'problem case'. Maethorwen Hawkhelm, a former Farstrider who had apparently shown more of a proficiency in the Light than she had in the art of hunting and archery was foisted upon a protesting Itharen for training.
The Blood Knight struggled to get along with the Squire, finding her lazy and dim-witted. They travelled together for many years during the Pandaria campaign and into Draenor. Over time Itharen came to realise Maethorwen had a hidden cunning and grew to respect her much more.

Most recently the Knight-Commander was placed under the Contingency, a small organisation operating in the Eastern Plaguelands. There he was given another charge, Bachian Duro'Ramar. The two came to blows (sometimes literally) and Itharen grew spiteful of the arrogant young Knight, tasking him with impossible goals and harsh training. Eventually the two became less hostile and in some ways Itharen began to view Bachian almost as a son.

Now, leaving The Contingency and seeking new assignment, Itharen was angered to learn that the Order was essentially forcing him into a voluntary retirement. Told he could keep Maethorwen as a squire while he found an organisation to work with, he reluctantly began to seek out somewhere to work.


What is your character's skillset, what would they contribute to the Convocation?

While elderly and slower than he used to be, Itharen is a skilled warrior. Favouring a sword and shield though able to use a ranseur and two handed blade with competency he has honed his martial skills over his many years of combat experience. Itharen is also an excellent tactician, having a good grasp of how a battlefield should work.
Some may disagree but the Knight himself considers himself to be an excellent trainer of new recruits, employing drill sergeant-esque methods and pushing them to the extreme. Itharen has been disciplined multiple times for his training regimen.

How does your character's respond to authority?

Itharen has a bad history with responding to authority, during his time in the City Guard he was insolent and surly. As he rose through the ranks of the Blood Knight Order he ran into less and less instances of insubordination due to the fact he had less people to answer to.
Now Itharen has been retired and has to join a new organisation, he will have to deal with answering to other all over again, something the the Sin'Dorei may find difficult and distressing, especially as his squire would technically be the same rank as him.

4) Should powerful artifacts be preserved as a record of history, or put to use in forging the future of those who acquire them? If either, why?

Look, you can count all the times when a powerful artifact has been used on one hand. When its gone wrong? Don't even get me started. You could fill this room with a list of misuses, abuses, accidents and apocalypses that have come about because of powerful artifacts.
I'm no fucking magister, and I certainly don't have a clue about the arcane except the thirst but when it comes to common sense, you don't mess with shit that's been buried for hundreds of years. It's been buried for a reason. People go mental over the power of artifacts...well, just power in general. Our people's history especially is fraught with bargains for power.

I say we look at it and think “Right, that's going to destroy us all if it falls into the wrong hands” and then chuck it straight into some black pit where no one can get to it.
I understand that it might be great in the short term if we have some ancient device that can increase our power, enabling us to enter a golden age of technology or whatever but eventually it might run out, it might turn evil or maybe it'll overload, vaporising us all and leaving a crater where we used to be.

I'm not saying that the magisters or The Reliquary can't do their job, I know they can (they'll let you know about it every opportunity they get), I know that we've had successes in the past but ask yourself this...is it worth it? Even if there were thousands and thousands of examples of artifacts improving our lives and helping us there's one that will always stick in our mind, in all of our minds.
You may not say its an artifact but to me, its essentially the same thing, it left our civilisation helpless and adrift, reliant on narcotics and cheap magic and brought our proud civilisation to the brink of ruin.

But what do I know? I'm just a fucking Blood Knight. 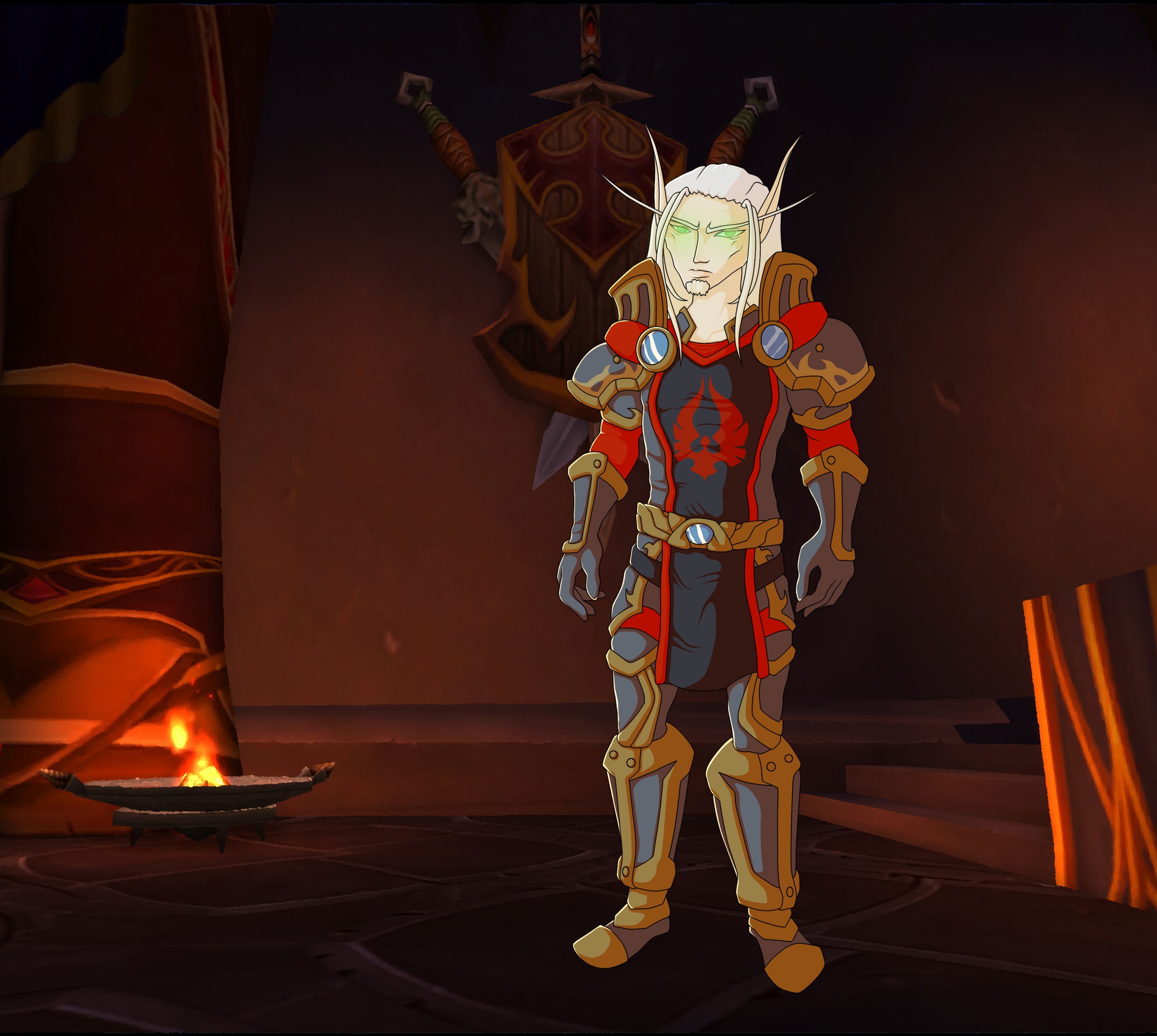 This and Maethorwen's application are pretty much what we had in mind when we made the application. I'll send you a message in game so we can move on with an IC interview and a clearing up of OOC questions. You now have access to the rest of the forums and can view the d20 system or event recaps.
Top
Post Reply
2 posts • Page 1 of 1

Return to “Guild Information and Applications”